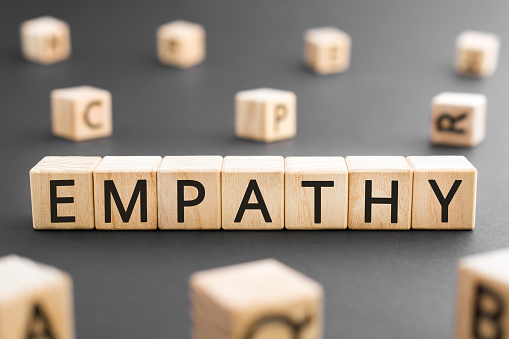 There’s a misconception that autistics don’t feel empathy. While every autistic experience varies, personally I have found that although I do sometimes struggle with empathy, the issue more often comes from the fact that I am intensely empathetic, but I lack the instinctive social skills to express that empathy. But before we get into that, let’s remind ourselves of some definitions, just so we’re clear:

Empathy: the ability to understand and share the feelings of another.

Sympathy: feelings of pity and sorrow for someone else’s misfortune.

The crucial difference here is that empathy is based on understanding someone’s feelings.

So, why do I believe I am empathetic? Well, for a start, I’m sensitive to other people’s feelings; arguably, too sensitive, on occasion. If I am near someone who is anxious, it affects me. It’s as though there is an electric charge in the air, causing me to feel on edge, occasionally even more so than the person who actually has reason to be anxious. Similarly, when someone is distressed, I absolutely feel their emotions. When I was younger, I would get upset whenever my sister got told off, because she would start crying, and I would see her sadness and experience it myself. I would feel guilty when other people would get told off in class, even though I was perfectly well behaved. To this day, second-hand embarrassment is agonising.

In other words, you could say I have an abundance of empathy – I feel everything. The problem arises however, because I’m awkward in expressing empathy. My Asperger’s means that I lack the instinctive social tools to convey my sympathies, even when I feel other people’s emotions intensely. Because it’s difficult for me to read people, I am stuck on how to communicate compassion. There’s no manual for how to reassure someone – and subsequently I’m stuck cycling through a list of clichéd reassurances that sound stale and insincere when I say them. And so more often than not, I find myself confined to awkward silence, and this leads some people to conclude I lack empathy. I don’t, I just don’t know how to express it in an appropriate way, which can be extremely frustrating, and sometimes leads to me trying to avoid situations where I feel obliged to attempt reassurance, which in turn can make me come off as negligent towards the emotions of others, perpetuating the cycle.

Another difficulty I think that a lot of people have, but which is perhaps notably prominent in autistics, is that we approach complex human emotions from a position of logic and problem-solving, when in reality, the emotions of the people around us aren’t always logical. Aspie brains in particular tend to be quite analytical (at least, mine is), and so we hunt for logical solutions. This can lead to times where, in trying to root out a rational cause-and-effect progression, and justify a logical solution, we misinterpret events. We will often try to problem-solve and offer pragmatic advice, when actually what our emotional friend needed was a friendly ear, and a chance to vent. People don’t always want solutions, sometimes they just want sympathy. Because we are not socially programmed in the same way as neurotypicals though, autistics can miss the social cues that would tell us what our friend is looking for.

There’s a trope that autistics have a tendency to make things about ourselves when we’re actually just trying to show empathy. When someone else shares an experience, we often tell stories about our own lives and inadvertently change the topic back to our own experiences – which can make us come off as self-absorbed, but in reality it’s actually because we are trying to show empathy and reassure our friend by expressing how we relate to their feelings through a related experience. The message here then is to not judge us too harshly if our attempts at empathising fall flat, and for autistics themselves to be aware of this difference in our mental programming, and try to account for it.

But I would argue that autistics aren’t the only ones susceptible to misguided attempts at empathy; neurotypicals are guilty of this too. This came up quite recently for me, when I had someone tell me, in response to me relating my autism diagnosis: ‘I think we’re all a little bit on the spectrum,’ This statement is actually fairly common, and – while it’s rooted in a good-intentioned attempt at reassurance and friendliness – to an autistic, it can come off as trivialising our lived experiences, minimising our actual struggles by saying we’re not that different. In actuality, we are different, and we should embrace that diversity – not downplay it.

This brings me to the real message here – maybe we should all be aware that sometimes it’s okay not to empathise. We don’t always understand how people are feeling, we can’t always relate, and in these times, maybe we shouldn’t try to force empathy, but instead, maybe it’s just enough to sympathise with the person, and offer what assistance we can. Sometimes it’s enough to simply appreciate, and not need to understand. Maybe what’s actually important is demonstrating that even when we can’t understand or share someone else’s experience, that we can still show them respect as human beings. We don’t need to minimise or ignore our differences to act empathetically.

One thought on “Autism & Empathy”